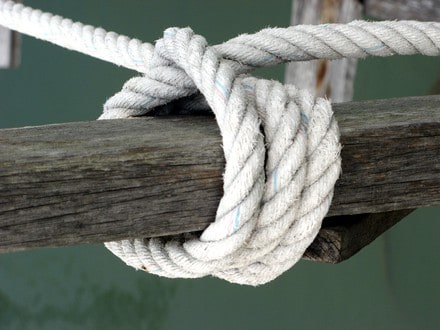 Knots are one of the most basic building blocks for constructing things from improvised materials, as well as useful for performing a wide variety of tasks. A good working knowledge of knots can prove very useful in your everyday life.

When describing how to tie various knots, it is important to know the correct terminology for the parts of the rope or cord, and for the basic ways of arranging the rope.

End – The free end of the rope, sometimes also called the  Running Part.

Standing Part – The long end of the rope. This end is often connected to something else or is what is used to pull an object after the knot has been tied.

Bight – Formed by bending the rope back along itself so that the end is parallel with the standing part.

Loop – Formed by making a bight, and then crossing the end over the standing part.

Often more complex knots are made by starting with simple knots. Some simple knots you should learn include: Overhand Knot, Square Knot, Half Hitch, & Clove Hitch.

Knots are also used in combination with various patterns or wrapping the rope to form Lashings. A good working knowledge of knots and lashings will enable you to construct basic structures and implements from natural elements such as logs and branches. They also can prove very handy in common everyday tasks when camping, loading cargo into vehicles, etc.