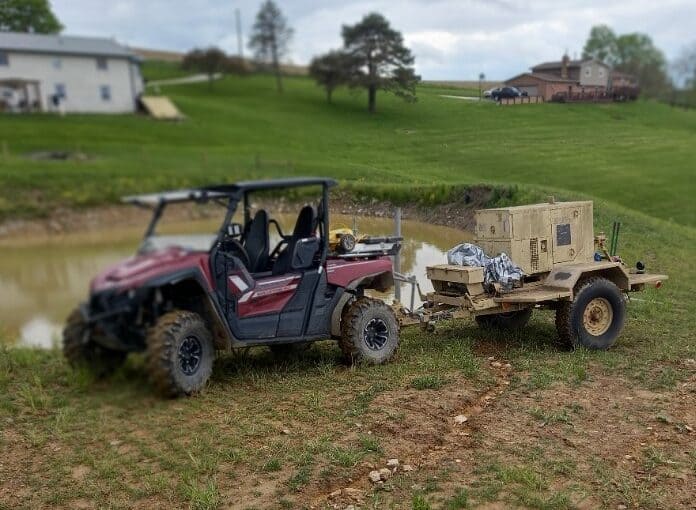 A good friend of mine bought a MEP-802A military genset recently. It so happened I was looking for ways to power a 240V arc welder and some larger 120V shop tools well away from any grid power hookups. I was considering renting a diesel powered welder / generator, but it turns out the military genset worked great instead.

I am building a deck that overhangs over the water of our pond using some old surplus Unistrut that we were able to get ahold of. The stuff is like a grown up version of the old erector set toys I remember playing with as a kid! Although you can build a lot of stuff just using bolts, brackets, and other fasteners – for this deck I wanted the cleaner look that welding provides.

Can you run an arc welder on a generator?

I have tried running my 240v arc stick welder in the past off of a 5.5KW portable gas generator. Although it should be within the rating specs of the generator, I found it just could not provide the surge of current needed when first striking an arc. The little gas engine would immediately bog and by the time the throttle could bring the generator back up to the necessary rpms, the welding rod had already stuck and tacked itself firmly to the project. It acted like the welding current was set way too low (no matter where you set the welder.) The rod would always stick instead of striking a sustained arc.

According to the rating tag on the MEP-802A genset, it is only a 5KW generator, although it is physically much larger than the 5.5KW portable gas generator I had tried before. It is also powered by a larger twin cylinder Owen diesel engine. I was hoping that the larger rotating mass of the diesel engine and the generator head would carry it through the initial arc strike without bogging. Also military equipment is typically over built and under rated when it comes to capacity.

Fortunately it turned out the MEP-802A genset indeed powered the welder with ease. While it might still be slightly harder to start an arc when compared to grid power, it is extremely close. I also do not hear any bogging or really much of any difference at all from the steady hum of the diesel engine when starting a weld. I have also been using the generator to power a 120v metal chop saw and some hand held angle grinders. All of them have ran flawlessly.

One of the great things about the MEP-802A Military Genset is it has a switch to easily switch it between several different modes, including 3 phase, single phase 240, single phase 120 (higher amp capacity), and single / split phase 120/240. The last one is the mode that most closely matches common grid power here in the US. When in this mode, you will have two legs of 120V that are 180 degrees apart (in terms of phase), which can be used separately with a common neutral, or used together to obtain 240V power. This mode is selected by a knob on the generator’s control panel.

The generator my friend purchased was already setup in this mode, as well as already having a 50A welder outlet attached. However there was not yet any outlet providing access to the 120v power. The unit does come with a 110v “convenience outlet” however it is only rated for 10 amps (which is too low for my chop saw), and for some reason it did not appear to be working anyway on my friends unit.

Since I knew the 10A outlet probably wouldn’t be sufficient for my needs, rather than try to fix it I decided to add a 20A 120V GFI weatherproof outlet to the genset just above the 240V welder outlet that was added previously.

When using the split phase 120/240v mode, the 240V power is obtained from the main lugs L1 and L3. You can obtain 120V from either L1 and L0, or L3 and L0. In this mode L0 acts as the common neutral. There is also a Ground lug that should be connected to your outlet in either case. When possible you should also connect an earth ground if one is available.

One last requirement is that the Neutral lug should be bonded to the Ground lug in only one place. This could be on the generator itself if using it for remote power, or if connecting to a main panel to power an out building, then this bonding could be in the main panel itself. The important part is it should be bonded in only one location to prevent a ground loop. If any of this is confusing, it is best to have a qualified electrician check your connections to ensure it is safe!