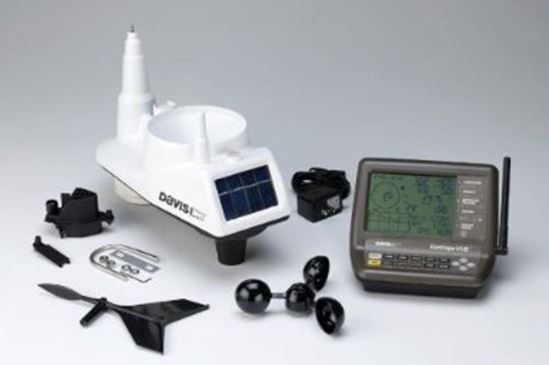 I wanted to get an accurate idea of the mean wind speeds at my home. I have noticed that the land features around my house seem to have made the site noticeably windier than the other areas that I have lived. As alternative energy projects have always interested me, I decided I would like to experiment with building a homemade wind turbine.

I was originally planning to spend a little less, but after reading a lot of product reviews, I found that most the low-priced residential units were either unreliable (would quit working or leave lots of gaps in the data logging) or were found to be completely inaccurate.  Many of the reviewers mentioned that they later ended up buying this model after trying several of the lower priced options out there.

The setup was extremely easy. The setup mainly consists of attaching the wind vane and speed anemometer to their shafts which secure with a set screw.  Then the rain collection spoon sensor is inserted into the bottom, held in place with a thumbscrew. Install the battery and the sensor (ISS) unit is ready to mount.

The sensor unit is solar powered with a battery backup and has a range of 1000’. I found the reception to be great. I can carry the control unit anywhere in the house and have never lost reception.

The sensor unit comes with the hardware to attach it to a pole. The pole itself is not included, so I just used a galvanized fence post. The top of the sensor unit also has a convenient bubble level built in to ensure the unit is installed plum.

The solar cell should be pointed due South, so that the wind direction reading will be accurate. If necessary, you can point the solar cell a different direction and then re-calibrate the directional sensor. After setup the unit control unit started receiving data in a couple of minutes. The wind speed is updated about every two seconds and the control panel gives a great set of historical data, from graphing  the last 25 hours 25 days, 25 weeks, 25 months, as well as high and lows for all of the same time frames.

So far I am very happy with the purchase. I look forward to getting started on my homemade wind turbine, and then using the wind data to see how a commercial turbine would have performed.

Update: After about 1 year of use, the weather stations rain gauge quit working on my unit.  I double checked that the mechanical dumper was flipping / dumping as water entered the funnel and it was. I also removed the rain sensor unit from the bottom and it was clean and there were no obstructions to explain why it quit working.  It appears it uses a small magnet on the dumper, and apparently a magnetic field  detector / switch inside the main sensor array to measure / count the spoon dumps. Even passing a small rare earth magnet near the sensor area would not trigger any rain readings.

This was as far as I am willing to invest time wise in troubleshooting the unit. I will be looking for a replacement weather station as I want to have accurate rain readings. I have been fighting water ingress in the basement, and being able to track rainfall will help me to measure my progress on that front.