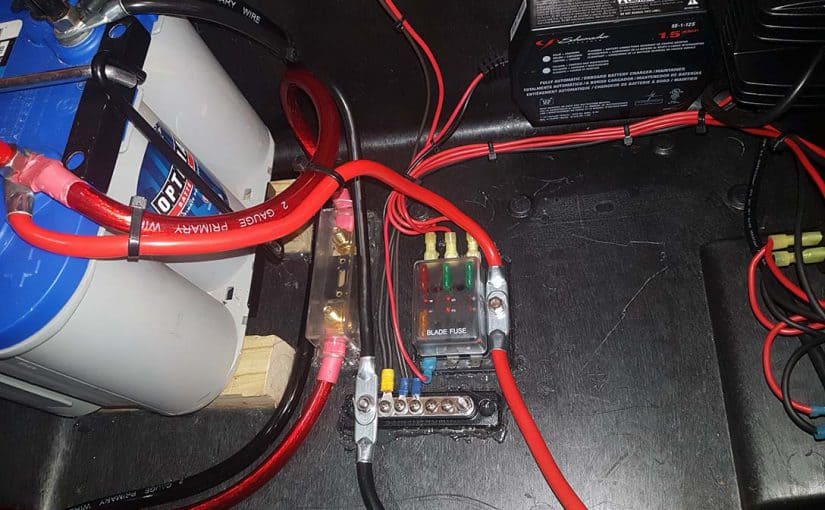 This is the fourth part in our series on how to build your own large solar generator. In this part we will be completing the wiring for the generator, including the solar charge controller, AC inverter, LED work lights, and USB outlets.

There will be two sets of main battery cables for our generator. The first is the large set with pre-wired fuse that was included with our Kreiger inverter. The second set will be used to connect the battery to the solar charge controller, LED lights, USB / cigarette plug outlets, and AC trickle charger / battery maintainer.  To do this it will run to a fuse block for load protecting all of these components. And finally, this second set of cables will also provide power to our high-current quick connector. 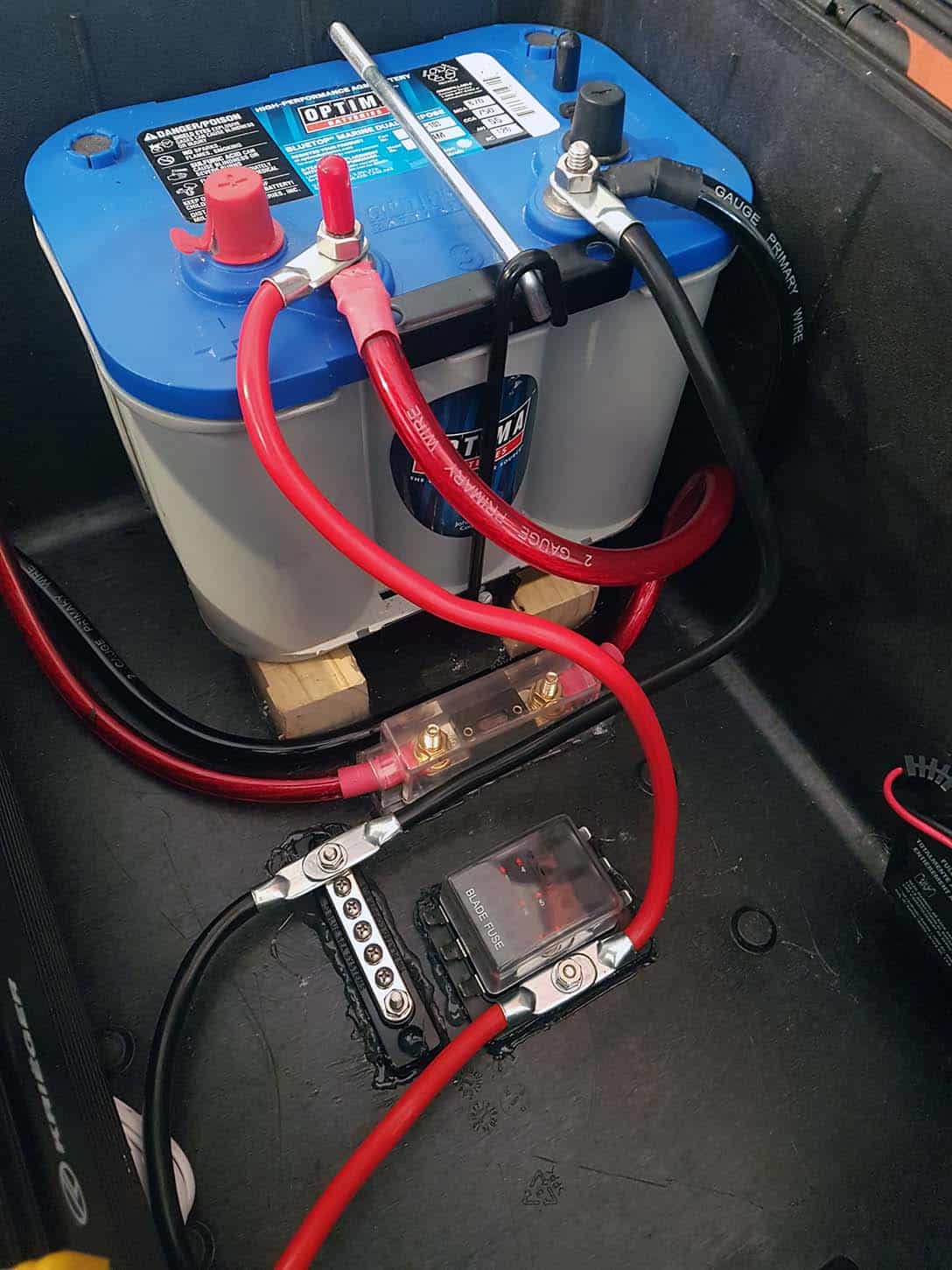 Note: We will want to make the actual connections to the battery last, as this reduce the risk of causing an electrical short.

In order to simplify the cabling, I placed the ground (-) bus bar, and fuse block between two 12″ battery cables. One end of these will lead to the battery, the other to our high-current quick connector. This eliminates the need to run a 3rd set of cables directly to the battery, and also helps to reduce the total length of high-current wire needed.

In order to determine the placement of the fuse block and negative bus bar, we need to connect the one set of cables to the high current quick connector first. To do this, snip the ring eyelet connectors off one end, and replace with the crimp connectors provided with our high current quick connector. I used a large set of crimpers for this, but you can also use a punch and a hammer to crimp the wire on these large connections. Once the connectors are crimped, they will lock into the quick connector body.  Make sure you place the red wire on the side marked with the +.

Then using the ring eye connector on the other end of these cables, attach the other set of cables stacked onto the lug for our negative bus bar, and the lug for our fuse block. Refer to the picture for wire placement. We want to make sure these lugs are tightened nice and snug so that we have a good solid connection.

Now that we know how much cable we have to work with, determine the best place to mount the bus bar, and the fuse block. Once that is determined, mount them both firmly in place with the glue gun. Make sure to keep the battery disconnected as much as you can in order to reduce risk of an electrical short.

Both LED work lights will be wired to their power switch in the same way. We will start with the one mounted to the case cover, as it is the easiest to see the connections. 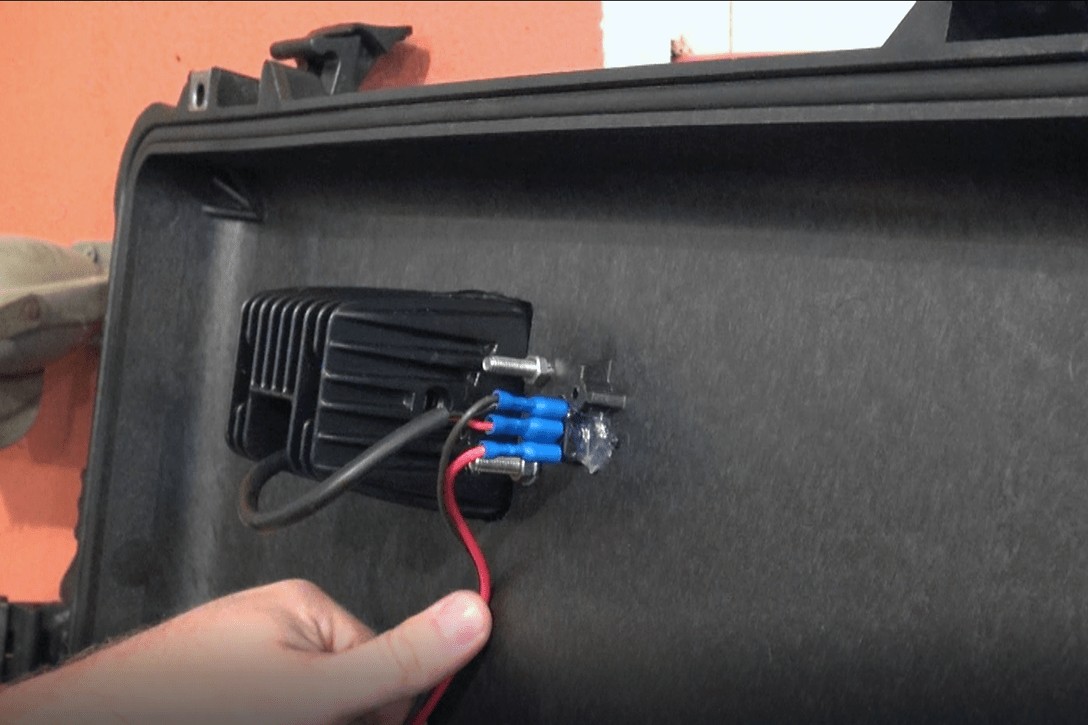 The first step is to bend the LED power wire over to the power switch, and cut to length while giving a small amount of extra slack. Then strip the insulation off the two power wires.

Now take the free end from your black wire spool and strip the insulation off that as well. We will be crimping this long black wire to share the same connector as the black wire from the LED work light. This will provide ground to both our LED work light, as well as the indicator light for the power switch.  Its always a good idea to gently tug on your wires after crimping to make sure the connection is solid.

Now route the two long wires from the spool down the inside of the cover, and then down along the edge of our case towards the fuse block and bus bar. Giving yourself some extra length to tidy the wiring later, cut both wires off the spool.

Follow these same steps to wire the other LED work light inside the case.

The three components of this pod all have separate blade connectors, but can be daisy-chained onto the same wire to reduce the total number of wires needed. We will also be wiring them into a power switch, just like we did the LED work lights. 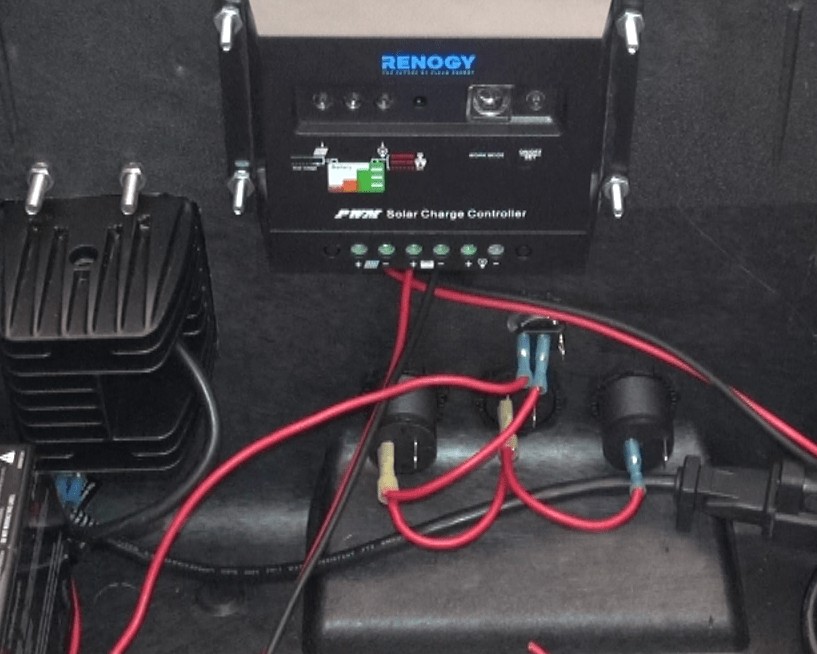 We will start by taking the free end of the red wire spool, and attaching a blade crimp connector. Connect this to the source terminal of the power switch (the opposite side of the brass colored terminal). Route this wire neatly towards the fuse block, giving yourself some extra length and cut it from the spool.

Once again taking the free end of wire from the red spool, attach another crimp connector and attach it to the load (middle) terminal of the switch. If you look closely at the two blade terminals on each of the three round pods, you will see them labeled with a + and a –.  We want to daisy chain this red wire to each of the ones marked with a +. To do this, bend a loop in the wire first towards one of them on the end. Make the loop tidy, but with enough slack that the wire wont be strained. Fold the wire in halve at this blade terminal, and repeat the process until you have marked the location (with folds) for each terminal. When you reach the final + marked blade terminal, you can cut the wire off the spool.

Snip your red wire at each fold, and strip the ends of each segment. Place the ends into crimp terminals, and crimp them snugly. When you are finished you should have a red wire with four connectors all attached to it. One will be for the switch, and the other three for the round pods. Attach them to the terminals like shown in the picture.

We now need to repeat this same process for the black ground wire. For this one, we can also include the long black wire to our bus bar in the daisy chain. When finished, it should look like this: 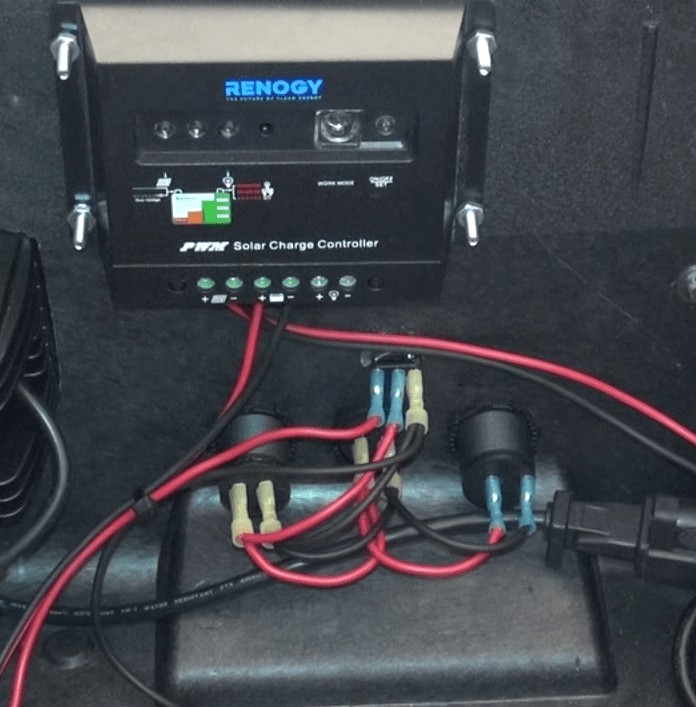 We now have all of our components wired, with the exception that we need to connect them all to the fuse block and negative / ground bus bar. 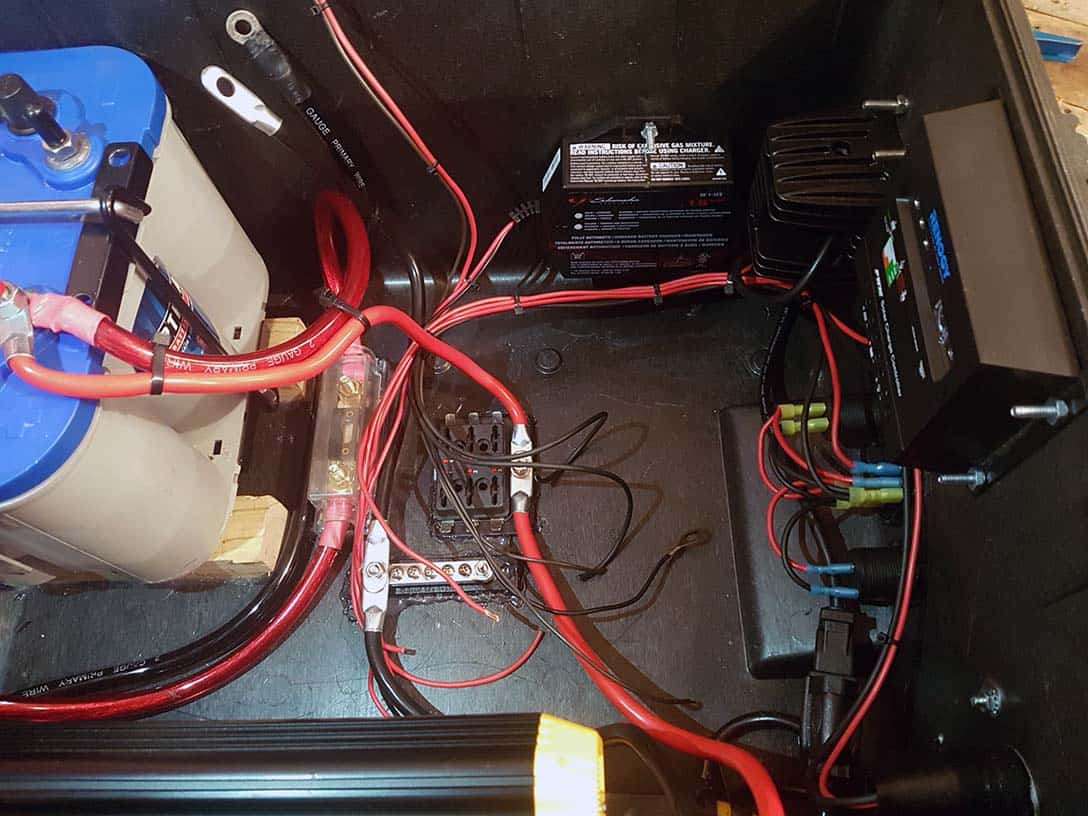 Lets connect the black wires first to get them out of the way. All of the connections on the bus bar are electrically connected together, so the placements do not matter. We can also place two wires into one eye ring crimp connector to leave us with extra space for future connections. When you are finished each black wire should be firmly attached to a screw on the bus bar.

For the red wires, each blade terminal is fused by the fuse holder adjacent to it. It may make sense to fuse both of the LED work lights together, so their respective red wires can share the same crimp if desired.  I recommend connecting the remaining red wires each to their own fuse terminal.

Once the red wires are all connected as well, your wiring should look similar to this: 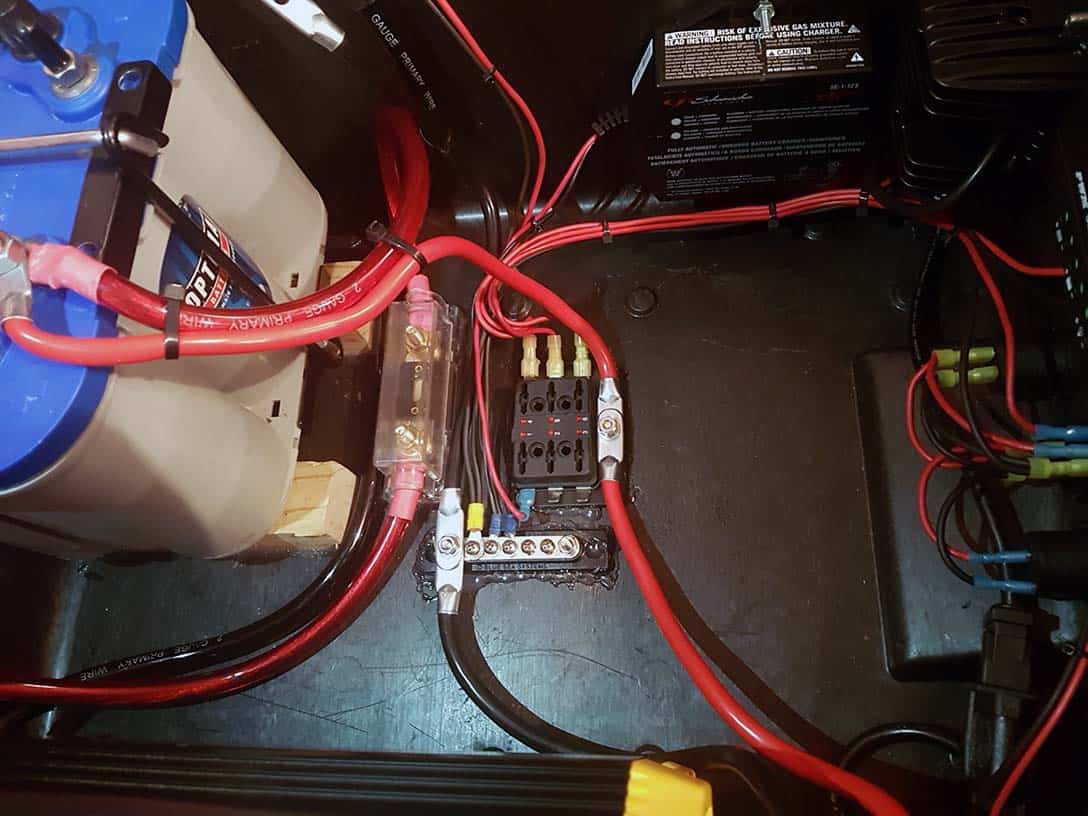 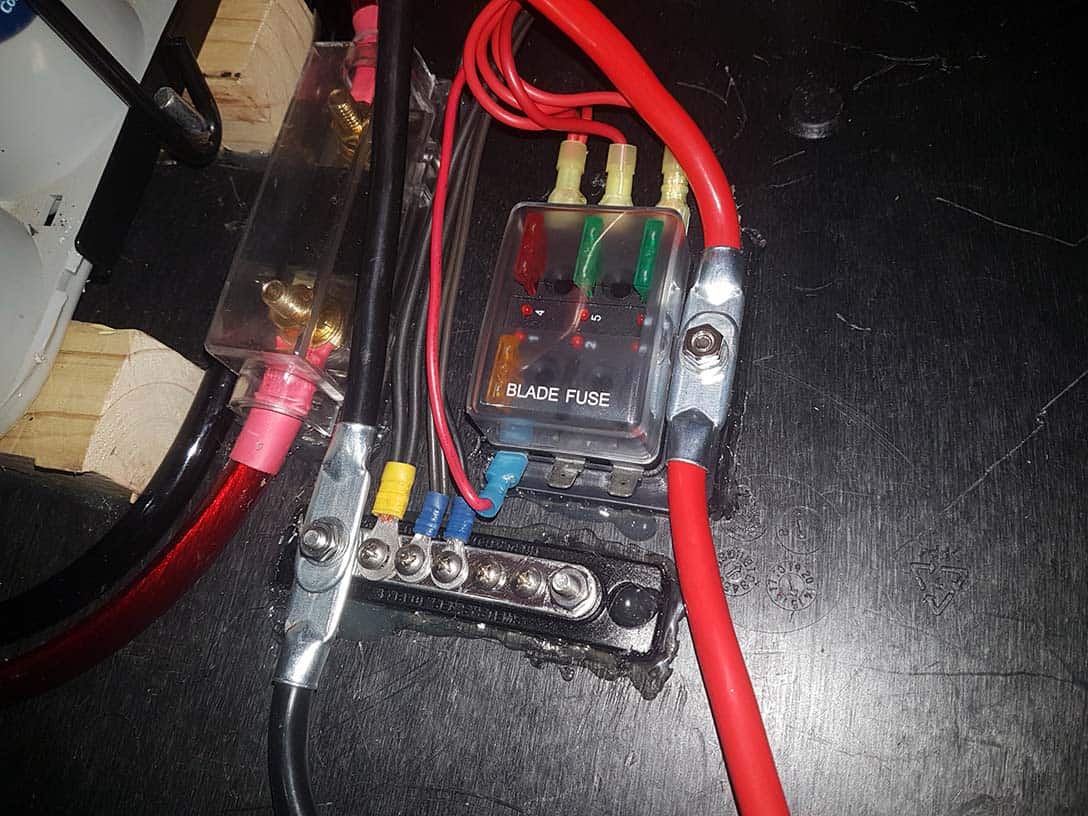 At this point the internal case wiring is complete, and you can test the various components!

Assuming everything is working, the only remaining things to wire is our solar panel to its extension cable, and if desired some jumper cables to a high current quick connector.

Because the wire made specifically for roof top solar panel installations is much more expensive and thicker than needed for a single panel, I am instead using high quality 16 AWG speaker wire. In addition to being much cheaper, it has plenty of capacity for a 100 watt panel as well as the additional benefit of having both wires bonded together for neater coiling. 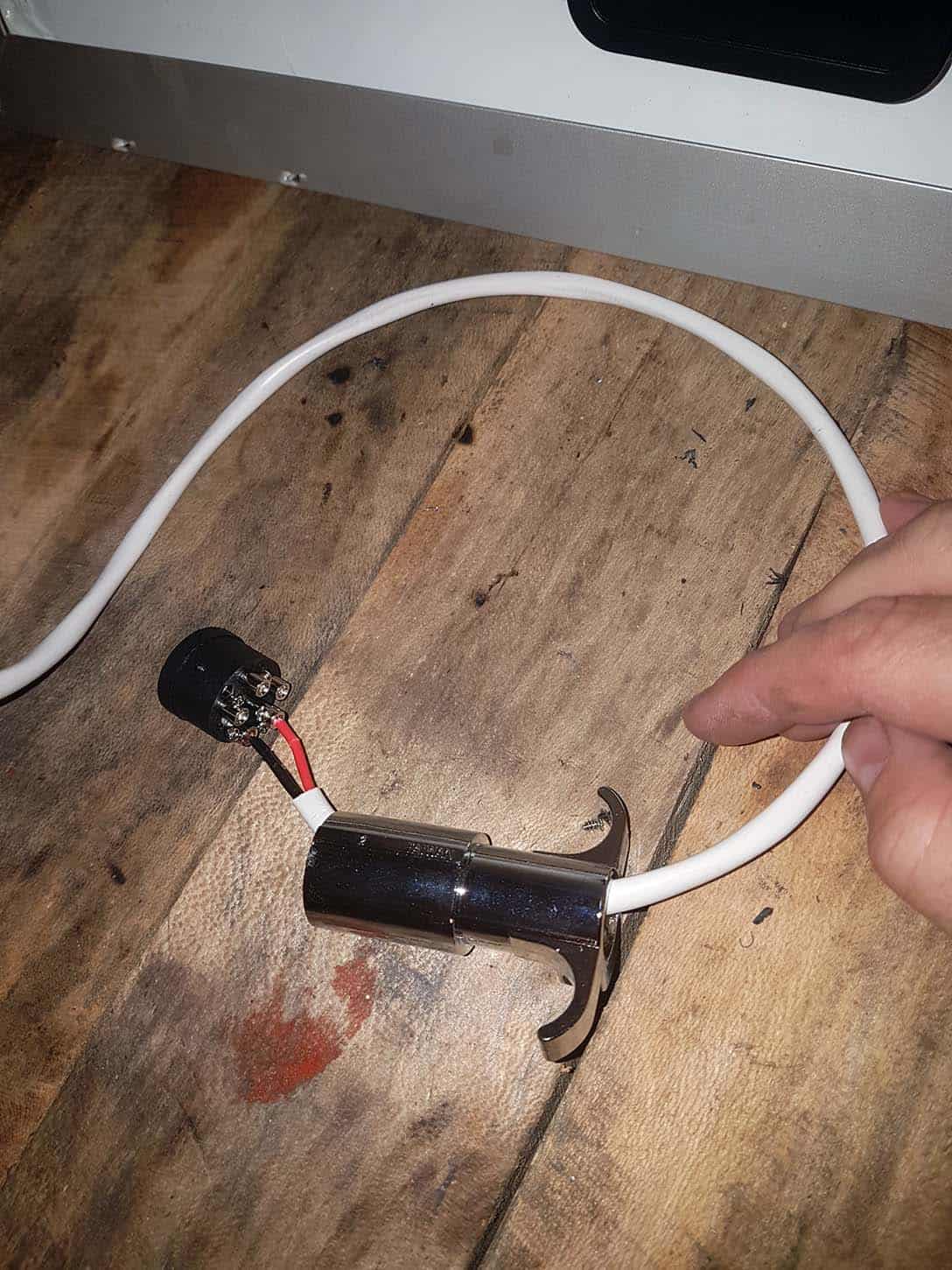 Connect the free end of the spool of speaker wire to the solar panel pig tail connections, using two butt-splice crimps. Make sure that the red speaker wire is connected to the pig tail marked with the + on the solar panel.  After splicing the two wires, wrap them in electrical tape to provide some extra weather proofing and to provide strain relieve for these connections.

Strip the insulation off the wires of this end, and install the male trailer plug connector. Make sure to connect the red wire to the center terminal, and the black wire to the pin labeled GD.  Once the plug is assembled, the wire was not quite thick enough for the trailer plugs built in wire clamp to provide strain relief, so I added some glue from the glue gun to provide some additional strength to the connector.

A set of quick connect jumper cables is a nice addition to our solar generator that will allow for easily using the internal battery for jump starting vehicles, or connecting to other high current devices such as winches, etc. 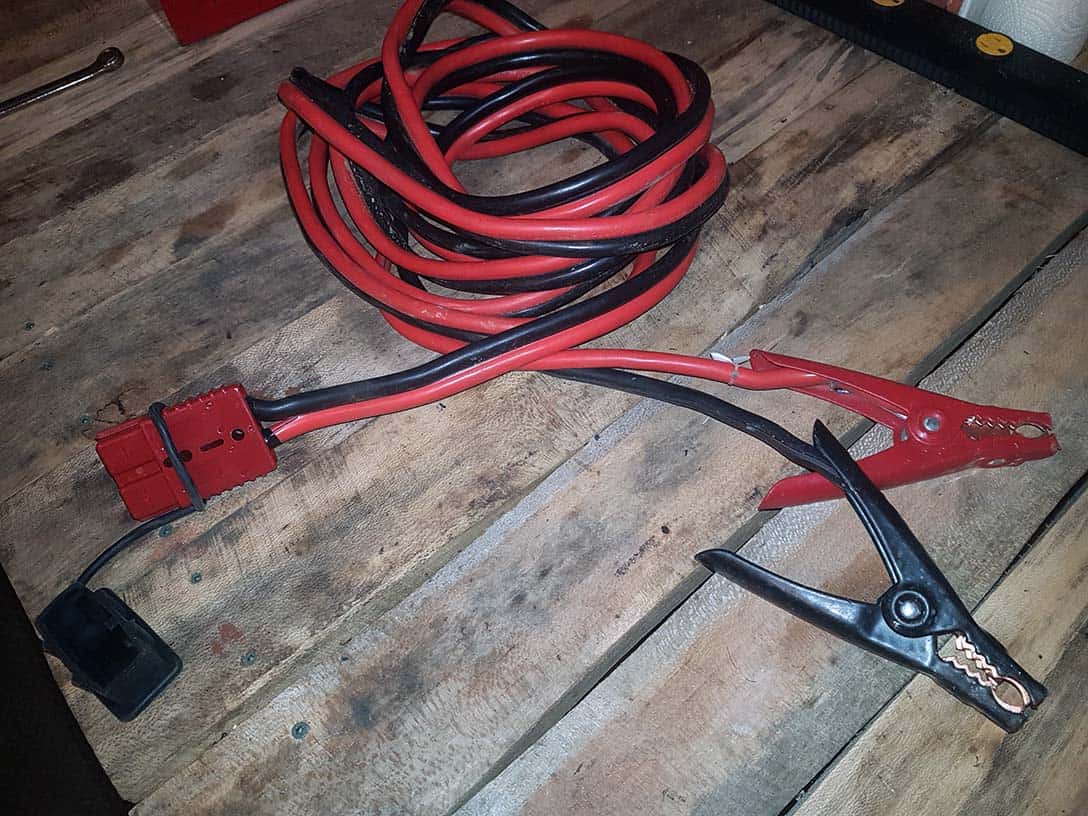 To make them, snip the clamps off on end of the jumper cables.  Then strip the insulation off each of the wires, and crimp the large connectors that came with the high current quick connector. Make sure the two crimps are rotated in the same direction as each other. Like before, if you do not have a specialty crimper for these large connections, you can use a hammer and a punch.

Insert the connector with the red wire into the quick connect body on the side marked with a +, so that it locks in place. Repeat with the black wire into the – side and that’s it!

Main Components for the Solar Generator

To see the full list of components used in this build, see Part 1 – How to Build a Large solar Generator

At this point the solar generator is fully functional and usable.  In Part 5 we will be adding a plexiglass cover and several improvements to our solar generator.