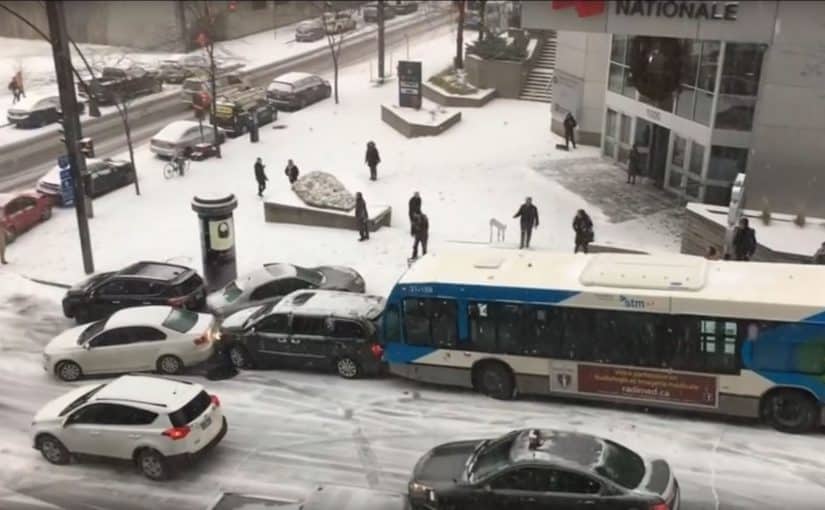 This video of a pile up in Montreal has been making the rounds in social media. It shows multiple vehicles, including two buses, a police car, and even a plow truck piling up on a very slippery roadway. It also perfectly illustrates both what works, and what not to do. The majority of the vehicles, including the plow truck, did not know what to do. Do you?

If you watch closely starting at 0:08, the driver of the green / white van responds correctly, and not only avoids the pile-up, but came safely to a stop well before any of the other vehicles. Immediately after that vehicle, a white pickup following the exact same path slides uncontrollably and slams pretty hard into the back of the bus.

Can you spot the difference in how the two drivers reacted?
Hint: watch the front tires.

How To Control a Slide

If you look closely at the wheels of the majority of the vehicles, they are not turning. They are locked up solid as the vehicle slides down the road. Many of them have the steering wheels turned, but it has zero input on the direction of the slide.

The green / white van however, did not hold the brake. Once the driver sensed the slide, he/she released the brake and instead began tapping them. Which allowed the steering tires to roll, which allowed the driver to steer away from the pileup. Once the van had turned fully sideways, the vehicle was actually able to reach a full stop well before any of the other vehicles. The truck immediately after, also had the wheels turned, but as you can see the wheels are not rotating. That driver was firmly holding the brake. As a result, the truck slid quite hard into the back of the bus. Hard enough to dislodge the ladders strapped to his rack.

So even in the day and age of anti-lock brakes, you can see they do not work in extremely slippery conditions. Why not? When all four wheels are not rolling, the anti-lock brake controller assumes the vehicle is not even moving. For all it knows, you are completely stopped.

Tapping and releasing using light brake pressure in nicely spaced intervals is much more effective. It allows you to slightly slow your vehicle, while still allowing your front wheels to rotate and control the direction of your slide.

How to Learn to React Correctly

Learning to control slides is an excellent technique to add to your defensive driving skills. Yes, I imagine many of you are thinking: “Sure, that’s easy to say, but its not likely people will remember that when the panic of an uncontrolled slide sets in.” I agree! And that is why I am big fan of getting out there and practicing the technique in a safe manner.

At your next opportunity, find a large open place you can practice on an icy day. Make sure it is away from other parked vehicles, or other obstacles you might inadvertently hit. Respect private property. Public parks are often empty on cold icy days, so their parking lots are usually a safe place to practice.

Starting out very slowly (5 mph at first), drive towards the open area and then slam on the brakes. Do this a couple times. Then repeat the same exercise, but instead just tap the brake. Experiment with how the vehicle reacts to both braking techniques, as well as how it responds to varying degrees of steering angle. You will be surprised at how much control you do actually have, even when it felt like there was absolutely no control before.

As you get more practice and experience, slowly increase the speed. Don’t exceed 10-15 mph without a lot of experience. You can learn most of anything you need to practice below 15mph anyway. Speeds over 15mph have a much higher risk of accidentally overturning the vehicle if you go into a sideways slide, and then suddenly the tires find traction.

Please be responsible with your practicing, even though it will become fun instead of scary. That’s the ultimate goal. When you do not panic in a slide, you can think and react appropriately. Your reactions also become second nature, or a form of muscle memory.

One thought on “How to Control a Slide on Icy Surfaces”